DRIVER: YOU ARE THE WHEELMAN 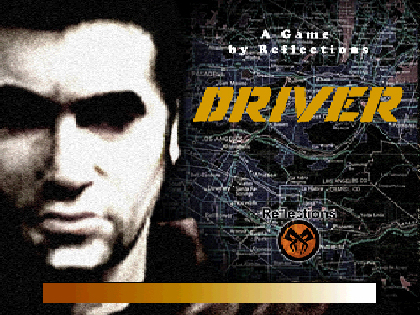 You can’t talk about Driver without mentioning the almost universal experience of being unable to complete the garage level. How are you supposed to do a reverse 180? And what the hell is a slalom?

This was exactly how I was introduced to the game. I first played it at a friend’s house with a couple of other people. I remember each one of us taking turns driving around the garage and failing to check off all the tasks on the checklist. (Completely oblivious that if you go to the mode clearly labeled “Training,” the game shows you how to do these stunts.)

But that failure barely mattered to any of us. The main appeal of this game was playing the Free Roam mode and running from the police in high-speed pursuits on the sun-baked streets of Miami. And maybe tinkering with the Film Editor mode a bit. And all of this was so fun, I didn’t even consider that there may be additional cities and game modes to unlock. 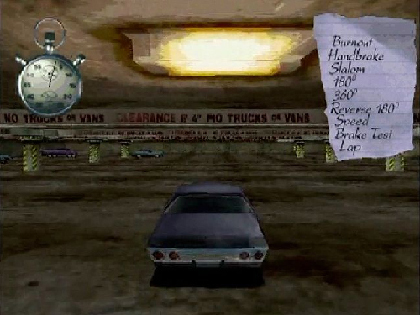 It’s pretty interesting to actually play through the Undercover mode and see the sights the game has to offer. The story is an homage and amalgamation of several 60s and 70s action movies. You play as a former race car driver who is now an undercover cop — which initially feels like a way to hand wave away all the crimes you’ll be committing throughout the rest of the game.

During most of the gameplay, the police are clearly the antagonists, which is pretty rad. But in the cutscenes, you’re reminded that you’re one of them and the gangsters are the true villains. As the story develops, the stakes continue to be raised, culminating in a plot to assassinate the President. A bit ridiculous, but it’s a nice arc that takes you from a smalltime, grungy apartment all the way to the prestigious role of saving the Big Man from criminals and even a corrupt FBI.

The missions usually take you from point A to point B, giving you barely enough time to speed through the streets and slide around 90 degree turns to your destination. It can be a bit stressful watching the time tick away and your damage meter fill up. But when you have a successful run, it does feel pretty rewarding.

Sometimes, though, you take a wrong turn and end up stuck on a narrow street, lined with rails, that doesn’t take you anywhere near your destination. Or worse, you wrap your car around a toothpick that’s been lodged in the ground, bringing you to a complete stop and possibly totaling your car. The grid layout of the levels can feel a little same-y, but it doesn’t matter too much because the handling was designed with these sharp turns in mind. But I don’t understand the design decision to put up rails on so many of the streets, further boxing the player in. The rails were my primary source of frustration throughout the game. Even more frustrating than the kamikaze police. 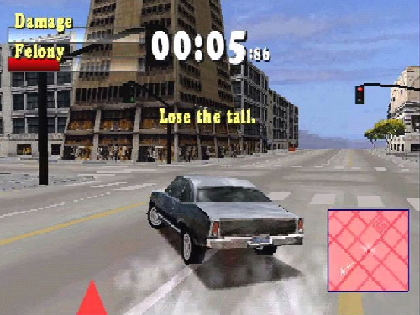 The game really shines when there’s plenty of open space to maneuver. And once you get used to the controls, it feels great to slide across multiple streets at top speed, barely missing oncoming traffic, and hearing the siren of a police car die out as it crashes a few feet behind you. Which again, is something you can get from the Free Roam mode, which is still my preferred way to play.

Driver is one of those games that actually has a lot to offer if you take the time to unpack it all, but freely driving around the first couple of levels has always been the main appeal for me. But I’m also the type of person who can’t be bothered to finish any of the GTA games. I just wanna mess shit up and run from cops, you know? No deadlines or goals, just a bit of consequence-free chaos. A filthy casual, I guess.

The graphics are also great, if you’re someone who appreciates the era. The scenery is simple, but looks nice as you speed past it. Little, blocky pedestrians leap out of the way of oncoming vehicles. Hubcaps fly off of wheels when taking sharp turns. Burning rubber creates actual smoke. And the cars all display visible damage. When I think of the PS1 aesthetic, this is one of the first games that comes to mind. I have the most memories of driving around in sunny Miami. But seeing a rainstorm at night in Los Angeles is very much worth the effort to unlock.

Driver also has a special place in my collection because it’s one of those games that seems to have magically appeared. I have no memory of getting it as a gift or of buying it for myself. I have absolutely no idea where it came from. Maybe a friend let me borrow it and I forgot to return it a couple of decades ago? If so, all apologies.