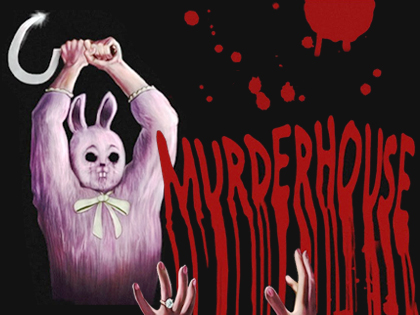 I’m perpetually late to the party, so this was actually my first experience with a Puppet Combo game. If you’ve been living under a rock like I have, Puppet Combo is an indie developer who has been making PS1-style survival horror games for years. They are very influential in the indie horror scene and are largely responsible for the PS1 aesthetic revival, alongside the folks behind the PS1 Haunted Demo Disc (and others).

At the time of writing, this is their latest game and their first to be published on Steam. Since this isn’t a 20 year old game, I’ll try to be kinda spoiler free. But if you want to go in completely blind, it's maybe best to stop reading here. Without giving too much away, in the main game you play as Emma, an intern for a local TV news station. The news team is doing a story in the now-abandoned home of the Easter Ripper, a serial killer who was executed years earlier. As you may guess, things don’t go quite as planned.

Before beginning the main story, you can play a prologue that takes place during the Easter Ripper’s murder spree in the mid-1980s. You take control of Justin, a boy who ends up alone in the shopping mall after attending a photo session with the Easter Bunny. This section let's you get comfortable with the tank controls and introduces the game's puzzle box style of progression. 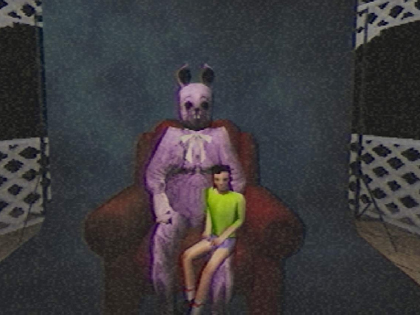 The climax of the prologue is excellent and makes it very much worth playing, but starting off controlling Justin is an awkward first impression. His character model is significantly worse than the others and his inventory screen portrait feels like a joke. I’m not sure what they were going for here, but the tone felt a little all over the place. The wide open spaces of the shopping mall aren’t very interesting either, especially compared to the shots of the inside of the house that you’ve likely seen in promo materials.

But these complaints are minor, as the prologue is pretty short. And once you get to the employees-only section of the mall, it starts to feel more like the game you probably came here to play. And again, the ending of this mode is extremely fitting and put a big, dumb smile on my face. So it definitely does the job of introducing you to the gameplay and getting you excited for the real thing.

Like the prologue, the main story does a great job of slowly building up tension. The beginning feels safe and allows you enough time to familiarize yourself with the environment, while hinting that things will inevitably become more dangerous.

The titular house is extremely well designed. It feels like a real space and has just the right level of spookiness. When you arrive, the power is out and the basement is dark and creepy. It's a run down place, but it doesn’t feel over the top or like it’s trying too hard to scare you. The environment is believable and the initial waves of unease feel very real and familiar. As the sun begins to set, a striking red haze descends on the house, foreshadowing the coming bloodbath and highlighting the game's excellent visual style. 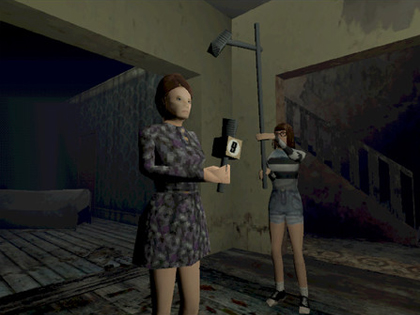 The game uses Puppet Combo's now-iconic blend of PS1-era graphics and VHS static overlays. This combination of styles is genius, as it makes this older style of graphics look better on modern monitors while instantly charming fans of either aesthetic. It also just feels right. Like Puppet Combo has tapped into the way these graphics look in our memories, crossing wires and triggering a nostalgia multiplier. The VHS aesthetic also cleverly extends to the UI elements, such as the inventory menu and stamina meter. It's a great look and you can see why this style has been replacated by so many others.

The audio is a bit of a mixed bag, though. The music is steller and does a great job of setting the mood. And I actually like the voice acting, but the audio quality is fairly low and often clips. The mixing is also hit and miss. Sometimes the music is too loud, sometimes the voices are too loud, and sometimes just one voice is too loud. This didn't really bother me during my playthrough, and the great music and charming visuals greatly outweigh the audio problems. But it's a flaw worth mentioning.

The character models (aside from Justin) look great and have a lot of personality. Gary, the chainsmoking producer, is a chubby, balding guy with a moustache and a gold chain. You see him and his half-buttoned shirt and know exactly the kind of guy he is. Emma, the intern protaganist, sports glasses and bangs and has a bit of an attitude, bringing MTV's Daria to mind. Dana, the star reporter, has a face that's a little too small for her head, which feels like an intenional gag on how rough lo-fi graphics can look. And the Easter Ripper, of course, looks fantastic and creepy and very much like the iconic box art.

As you'd expect, the overall gameplay loop is very similar to Resident Evil – you solve puzzles and slowly open up locked areas of the house. One of the first puzzles is to get the power back on, as night is quickly approaching and you'll need power to run the video equipment. The puzzles are typical of the genre, but overall they are down to earth and don’t feel ridiculous. (There's only one that's particularly tricky and borders on being excessive.) The game also uses an RE-inspired save system. But instead of typewriter ribbons, you use pencils. And, as another nod to RE, there are door opening animations between rooms (that can be turned off in the menu). 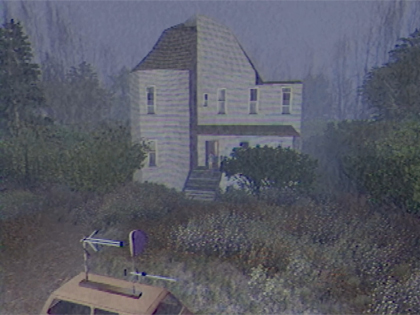 While this game wears its inspirations on its sleeve, it is very much its own thing. The house being much smaller than the Spencer mansion makes sense for the story, but it also establishes itself as a unique and more familiar setting. I really loved learning the layout of the house and actually enjoyed the small amount of backtracking required.

The tone is also much grittier than a Resident Evil game and much more straightforward than a Silent Hill. But as I mentioned previously, the tonal shifts may be my main complaint. I don't think this is a spoiler, as it's heavily implied by the villain's costume and some promo shots, but the Easter Ripper is primarily a child killer. This additional level of darkness sometimes conflicts with the game's more lighthearted elements. This next bit is much more of a spoiler, but I think it could serve as a necessary content warning, so I'm just hiding the text. Hover if you'd like to read:

Late in the game, you find the skeletal remains of the child victims. One of the skeletons is suggestively positioned to imply sexual abuse, in addition to torture and murder. The inclusion of such a heavy topic felt unnecessary and a bit tasteless. It's even more jarring because it feels like it comes out of nowhere. I think the intention was to shock you by revealing another level of the villain's evil and make you want revenge. But it didn't feel warranted and could potentially be triggering. Including this feels misguided when considering the more comedic elements found elsewhere. This can be missed and it isn't lingered on for too long. But I dunno, just not a fan of this bit and it tampers my opinion of an otherwise great game.

Another way the game sets itself apart from its classic inspirations is the fact that there's one enemy. This feels more in line with modern horror games, such as Alien Isolation and Slenderman. But unlike those hide 'em ups, Murder House eventually gives you ways to defend yourself. This was a pleasant surprise, because I was under the impression that running and hiding were going to be my only options. That’s mostly what I ended up doing, but just having a weapon in my inventory was a huge comfort.

As you'd expect, the game gets pretty tense and stressful. This is totally subjective and may depend on how often you happen to encounter the villain, but I thought the game did a great job of maintaining the tension without becoming overwhelming. The game is relatively short (my first playthrough was under three hours), so it doesn't take too much time to make up any lost progress if you happen to die (I did). Once you know how to solve the puzzles, doing them a second time feels quick and snappy. And as a reward/punishment for dying, you get to see one of the gruesome death animations.

As you play through the game, the other characters start to feel like fodder for the villain. But since that’s a trope of the genre, this isn’t really a complaint. The game is a clear love letter to 1980s horror and all of the tropes within are well observed, including the climactic confrontation between the final girl and the villain.

The ending is satisfying, over-the-top, and appropriately cheesy. And since release, Puppet Combo has said they'll be adding a bonus ending scene that will "blow your mind." Hey, that sounds good! They have also added a first person mode which looks incredible. (I'm gonna try that right after I post this!)

The game is not without its issues, but taken as a whole, it feels like a labor of love and has a lot that fans of the genre will like. I really enjoyed the game and will likely purchase more Puppet Combo products in the future.

Get the game here. Check out Puppet Combo's other work here.