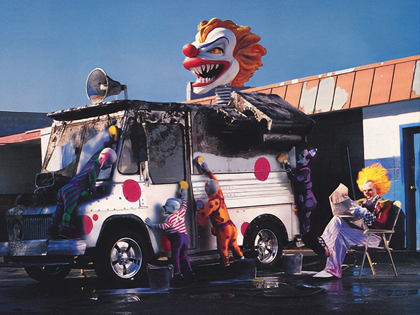 It's hard to imagine, but there was once a time when Rob Zombie's "Dragula" was the coolest fucking song anyone had ever heard. It may be an impossible task today, but that's the headspace you need to get into to appreciate the Twisted Metal games. Rob Zombie's music is so vital to the vibe of the game (and the series as a whole), that it's basically the soundtrack. Not only do you hear his music in multiple games and multiple levels, but he's even a playable character in this entry. And his vehicle? You guessed it: it's Dragula, baby! If you choose to play as Mr. Zombie in this game, you'll be burning through the witches and digging through the ditches in no time.

The hybrid of sounds in Rob Zombie's music is so evocative of the time and place this game came out. Chaotic, but danceable. Abrasive, but approachable. Edgy, but still silly and fun. All of these attributes can also be applied to the game: A tournament — where people fight to the death in vehicles rigged with heavy weaponry to have their wishes granted — that's been taken over by an evil clown, who happens to have fire for hair. This is truly a beautiful capsule of late 90s attitude. While your mileage may vary today, I can't express how up my alley this was at the time. 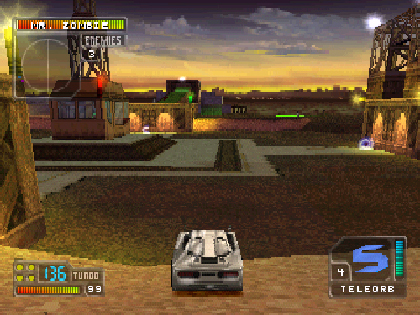 I was introduced to the series by a friend who had Twisted Metal 2, which most think is the best entry. After an evening of playing that game on his parents' big screen TV (incredible), I became obsessed with the series and the vehicular combat genre of video games as a whole. Unfortunately, this introduction was before I had a PlayStation of my own – so the ability to dig in was out of reach.

Some time later, my neighbor got Twisted Metal 3. This was a huge development, because we were better friends and he was literally next door. We put so many hours into that game. Absolutely eating up the ridiculous character backstories. Testing out every vehicle's special weapon. Memorizing the energy attack button combos. Exploring the secrets of each level. And getting every character's twist ending. Not sure if this is a great thing, but this game even taught me how to pronounce the word "napalm." I absolutely loved TM3 and had no idea that most critics view it as a low point for the series.

The next year, I started seeing promo materials for the all-new Twisted Metal 4. I have an extremely vivid memory of flipping through the Prima strategy guide at a Hastings, barely containing my excitement. New characters! New levels! A bigger and better world to explore! More stuff to blow up! And by this point, I finally had a PlayStation of my own. I don't remember the exact occasion, but I eventually got TM4 (probably for a birthday) and it quickly became one of my favorite games on the system. But ironically, it's one of the most hated by diehard fans. Like TM3, this game was developed by a different studio than the first two, who may not have had the best grasp of the series. One unfortunate downgrade, that I (an uncritical preteen) even noticed at the time, was how much more goofy the characters and stories were.

It starts with a sepia-toned cutscene that shows the backstory of Sweet Tooth (the evil clown and franchise mascot), which is something no one has ever asked for. It feels totally out of place and doesn't lean into what's appealing about the series. And it's mostly set to ragtime music — a very bad way to start a game called "Twisted Metal." Once you move on and get to the character select screen, there are more disappointments. Aside from the aforementioned Mr. Zombie, many of the characters and their backstories are lame in comparison to previous entries. 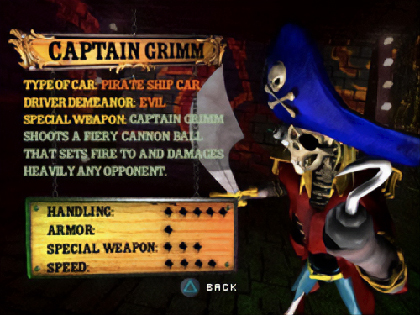 Mr. Grimm — who was once a badass, motorcycle-riding skeleton that lives off of souls — is now Captain Grimm, an undead pirate who speaks through a parrot. And there's Meter Maid, who fights her way through the contest to give Sweet Tooth parking tickets. As the only female character, she's also sexualized and we're led to believe she wants to give Sweet Tooth *something* else. The twist is, she's just fulfilling her duty as a meter maid. To be fair, the idea of a character being so devoted to their job that they would enter (and win) a life or death contest to fulfill their duties is a *little* funny. But nowhere near as imaginative as the classic, Wishmaster-esque endings the series is known for. And pretty disappointing to go from three badass female characters in TM2 to *only this* in TM4.

This subpar sense of humor is also present in most other characters. Drag Queen — an, uh, pretty insensitive character — loves drag racing, but also loves dressing in women's clothing. The joke here is that the word “drag” appears in both “drag racing” and “drag queen.” That's it. And there's Micro Blast, a leprechaun who is ridiculed by Sweet Tooth's minions for being short. (Even though the minions making fun of him are all just as short.) And then Sweet Tooth, the series mascot, is reduced to a voiceless clown with virtually no story beats outside of the awful intro. It's all pretty disappointing.

(One tiny highlight, though, is a line in the instruction manual that explains the backstory of the exterminator character, Goggle Eyes: “Traumatized as a child when he witnessed a giant cockroach win a pie-eating contest, Goggle Eyes swore to rid the earth of disgusting crawling vermin.” That's actually very good and funny.)

There are other characters, of course, but they're barely worth mentioning: There's a Two-Face/James Bond hybrid, an android space cop, a trash collector, a pizza delivery guy, and a suburban family. And, for the first time in the series, there's the ability to create your own vehicle. The options are pretty limited, so I spent most of my time choosing one of the 15 battlecry options. (With classics such as: "Mess with the best, die like the rest.") 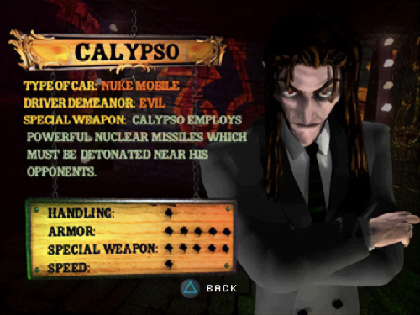 The best character, though, is the Wishmaster himself: Calypso. He's always been my favorite part of the series, and it was great to finally be able play as him. I'm always down for a revenge story, so his quest to reclaim the crown of the contest is a good motivator. But the story fizzles out in his ending cutscene, climaxing in an underwhelming cliffhanger. I still had the most fun playing as Calypso and his special weapon was my favorite in the game: an actual nuke that appropriately felt the most powerful of all weapons. It's very slow and difficult to use, but when detonated, it delivers an over-the-top explosion that often brings the game's frame rate to a stutter. This may be considered a bad thing, but to me the fact that it's so powerful it nearly destroys the game was actually extremely cool. I can still hear the explosion sound effect and the Wilhelm-like scream of dying enemies in my head.

Despite the story's flaws, I think the gameplay itself holds up pretty well. There's some PS1 jank, for sure. The handling feels weird and tight and the edges of platforms aren't always where they appear to be. But once you meet the game on its own terms, it's actually very fun. There's also some solid level design. The opening stage is a construction yard — while not being incredibly interesting on its own, there is a magnetic crane in the center of the level that you can use to pick up enemy cars and drop them onto explosive barrels. (Very fun to annoy friends with this.) There's also the Bedroom level, where every vehicle is inexplicably the size of a Hotwheels car, and you fight it out under a bed and on top of dressers. (I liked this level a lot, but I also really liked the North Pole level in TM3, so maybe don't listen to me.) 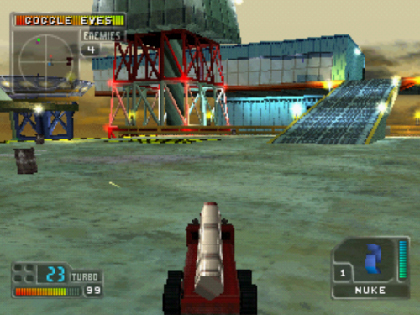 My personal favorite level may be the Oil Rig. It's big enough to offer some variety, but still has plenty of open areas for effective combat. I also remember it being exciting and intense to fight the level's two bosses at once (a first for the series, I think). Which reminds me of the game's multiplayer system. My favorite way of playing these games has always been couch co-op. Deathmatch definitely has its place, but fighting and exploring alongside a friend were some of my favorite memories of playing this game.

If you're reading this, you probably have similar memories. And hey, that's pretty neat, huh? Why don't you kick back, open up a can of Pepsi Twist, and put in a Rob Zombie CD. (Or maybe just the TM4 disc. The soundtrack overall is kinda alright.) Take a few minutes to reflect on all that mayhem and destruction you've caused. Think back to that one summer afternoon, where you and your best friend were kicking Sweet Tooth's ass in the Carnival, and the sun was shining in through your bedroom window, and you didn't have a single thing to worry about. What was that, like 20 years ago? Holy shit, right? Well, uh, look – I gotta go. Nice seeing you.