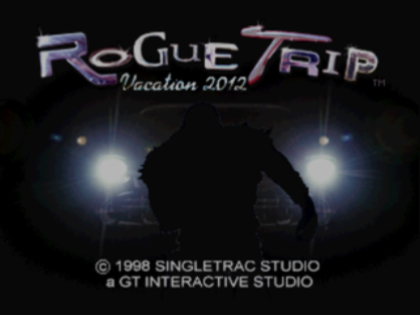 There was a large stretch of my childhood where if you asked me what my favorite game was, I probably would have said Rogue Trip: Vacation 2012. Not only did I have a blast playing it, but it also felt like a hidden gem — a game that only me and my friends seemed to know about. (Maybe I was always a hipster?) I only discovered it because it was included in a small stack of games that came with my previously-owned PS1. And it was so much better than all of the other games in my initial collection. (I’m looking at you, The Fifth Element.)

For those uninitiated, it’s basically a Twisted Metal clone. In fact, it was developed by the same team that created the first two fan-favorite entries in the Twisted Metal series. In all of these games, you drive a car rigged with heavy weaponry with the goal of destroying all the other cars that are also rigged with heavy weaponry. The car combat genre is admittedly a little ridiculous, but it was one of my favorite genres at the time and feels so distinct to the era. (See my post on Twisted Metal 4.) 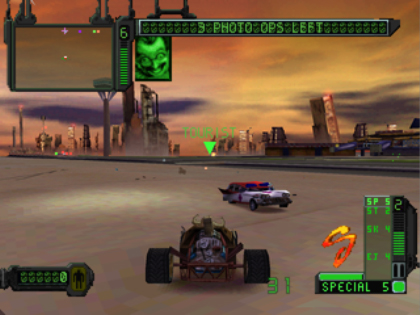 Twisted Metal deserves the limelight for creating the genre, but Rogue Trip took it to another level by tweaking the core gameplay loop. In addition to the standard death match win conditions, this game introduces a capture-the-flag element. Your primary goal is still to be the last car standing. But you'll have much better luck doing that if you can get health refills and weapon upgrades, which require money. And the best way to make money is to pick up tourists and take them to photo ops around each level.

This gameplay tweak is a great addition that enhances the traditional genre formula. Instead of it just being a free-for-all, there’s more focus, as the primary target is whoever has the tourist. And when you have the tourist, you become the target — of course. But the longer you can hold on and the more photo ops you can hit, the more powerful you become. When working as intended, this creates even more chaos and pile-ons than a loose everyone-versus-everyone contest.

However, this feature can (and did) turn off genre purists. Luckily, if you just want to focus on destroying your enemies, there’s the Challenge mode that removes the tourist element and plays like a traditional death match. 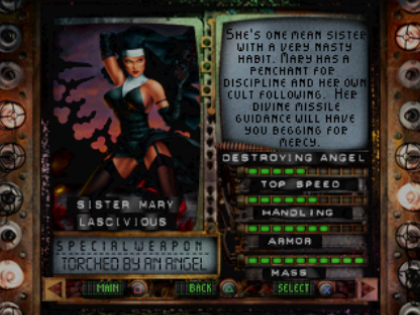 In addition to blowing up your enemies, this game also puts a bigger focus on destructible environments than others in the genre. The first level highlights this beautifully by taking place on an airport runway, complete with airplanes that you can blow up. This was tremendously exciting as a kid — me and a friend would often play coop and just focus on attacking the planes instead of the enemy combatants. The levels take you on a tour of post-apocalyptic United States and they all feature some big destructible item, ranging from national monuments to my personal favorite, a giant blimp. (You can also go to the moon in the Area 51 level and blow up Earth!)

Speaking of touring the American hellscape, the story of the game is great and feels ahead of its time. It’s not complicated or nuanced by any means, but what’s there is a great satire of American capitalism. Here’s how the game opens:

"It is the year 2012. The world is crumbling into a new Dark Age. Disease and poverty run rampant. In a world scourged by desolation, pollution, radiation, and despair — but HEY! Don’t let that spoil your day — Take a vacation! Are you literally dying to go on vacation? Well, now’s the time to make your dream come true! With a luxurious visit to one of Big Daddy’s vacation wonderlands. By the sweat and blood of those zany, whacky, oppressed lower classes, Big Daddy has made his little paradises shine like gemstones amidst the teeming crud of our sad, little, dying world. Aren’t you glad you can afford it? So call now, operators are standing by!" 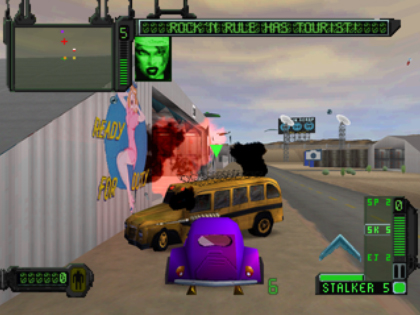 Unfortunately, most of the story is delivered up front and the endings are basically “congrats, you won!” It doesn’t come close to beating Twisted Metal’s wishes-gone-wrong concept. But it’s critical of capitalism, so points for that.

The characters are also a bit shallow. They’re basically all the typical, whacky, “insane” stereotype you would expect. One of them is an escaped mental patient who’s still in a straight jacket. (A little insensitive and illogical, sure, but fun in a very late 90s kinda way.) My favorite character as a kid was Pyro, mainly because he’s a cool-looking murderbot who drives a big rig. These days, I usually play as Sister Mary, the sexy goth-nun-dominatrix who drives a stolen church bus. 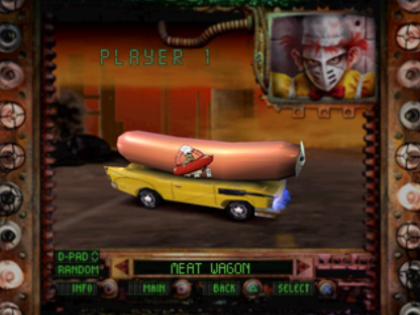 The fan-favorite vehicle seems to be Meat Wagon, which is a parody of the Oscar Meyer Weinermobile. This car’s special move is the “weenie whacker” which, as you may have guessed, smacks the enemies with the vehicle’s giant weiner. The 90s, folks! (This shenanigan resulted in the developer getting sued by Oscar Meyer. They own the trademark on giant weiners, unfortunately.)

My time with this game was cut short when I let a friend borrow it and never saw it again. He claimed that he left the disc on a chair and his sister accidentally sat on it and broke it. A tragic (temporary) end that probably only enhanced my low-level obsession with the game for the next decade and a half.

However, in 2017 I randomly stumbled on a copy at my local Vintage Stock and bought it for $6.99 — complete with the case and manual! Truly a wonderful reunion. And as a bonus surprise, it came with the previous owner’s handwritten cheat codes. And they’re on black sticky notes — how fucking cool! 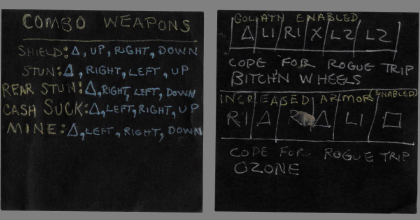 This game doesn’t seem to ever rank very high in most people’s lists of favorites, so my fandom is probably due to my personal history with the game. Love and loss and the mysteries of the human heart, you know? But whenever I want to be taken back to the era, putting this game in or playing a song from its equally-divisive ska soundtrack always does the trick.